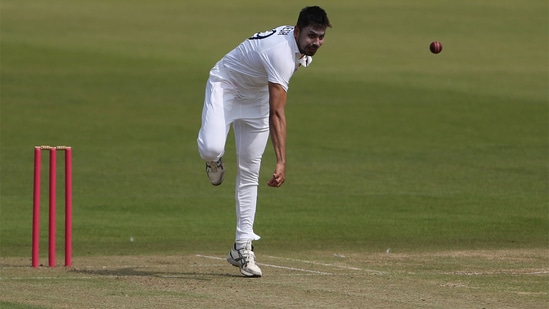 Fast bowler Avesh Khan will be taking no further part in the three-day warm-up game between Indians and County Select XI that is being played at the Emirates Riverside in Durham, the BCCI announced Wednesday. Avesh, representing the County XI, sustained a blow to his left thumb on the opening day of the practice game and was taken off the field after bowling 9.5 overs in which he produced two maidens and conceded 41 runs.

“Fast bowler Avesh Khan remains under observation of the BCCI Medical Team. He will not be taking any further part on Day 2 and Day 3 of the warm-up game,” the BCCI said on Wednesday.

Fast bowler Avesh was drafted into the India squad as a reserve player when the squad for the England tour was announced. After Virat Kohli and Ajinkya Rahane missed taking part in the three-day warm-up due to a stiff back and swelling in left hamstring respectively, there was further concerns in the Indian camp since Avesh was taken for scans after he tried to stop a well-connected drive from India batsman Hanuma Vihari in the afternoon session. Almost instantaneously, Avesh was seen wincing in pain as he signalled to the Indian dressing room and left the field with a strapped thumb.

“Fast bowler Avesh Khan sustained a blow to his left thumb on Day 1 of the warm-up game. He has gone to get a scan. The BCCI Medical Team is monitoring him,” the BCCI had said on Tuesday.

Avesh and Washington Sundar were allowed to represent the Select County XI after James Bracey and Zak Chappell would not be available. Chappell suffered an injury on the eve of the match, while Bracey reportedly came in close contact of a Covid-19 positive case and had to be pulled out of the game.

Meanwhile, the Indians were bowled out for 311 on Day 2 of the warm-up game with KL Rahul top-scoring with 101 and Ravindra Jadeja chipping in with an impactful 75