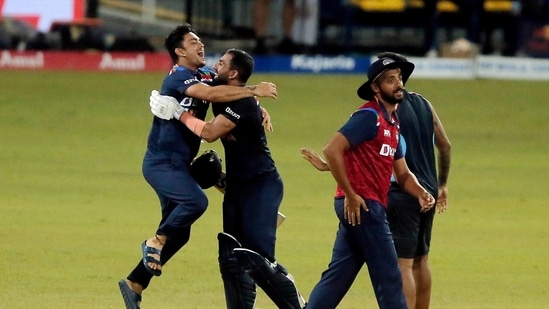 Twitter was flooded with congratulatory messages from noted former India cricketers after a young Shikhar Dhawan-led side snatched victory from the jaws of defeat in the second ODI against Sri Lanka in Colombo. The likes of VVS Laxman, Venkatesh Prasad, Aakash Chopra, Irfan Pathan, Venkatesh Prasad, Wasim Jaffer took to Twitter to celebrate India’s three-wicket win on Tuesday.

India were reduced to 193 for 7 while chasing 276 for victory as Sri Lanka spinner Wanindu Hasaranga picked up three crucial wickets of Prithvi Shaw, Shikhar Dhawan and Krunal Pandya. But Deepak Chahar and Bhuvneshwar Kumar put together an unbeaten 84-run stand for the 8th wicket as India reached home in 49.1 overs.

Chahar scored 69* off 82 balls while Bhuvneshwar was unbeaten on 19 as India sealed the three-match ODI series with a 2-0 lead.

“Haara hua match jeetne waale ko B- for Baazigar kehte hain. What a fabulous win. Outstanding from Deepak Chahar,” tweeted Venkatesh Prasad highlighting the talk about this being India’s ‘B’ team in the absence of Virat Kohli, Rohit Sharma, Jasprit Bumrah and other seniors.

“At 193/7, few would have given India a chance, but Deepak Chahar and Bhuvi have pulled off a remarkable win. Good contributions from SuryaKumar Yadav and Krunal and a win to cherish,” wrote VVS Laxman.

This was India’s 10th consecutive series win over Sri Lanka in ODI cricket.

“Great win by the boys. From a tough situation to pull it off was an amazing effort. Great to watch. Well done DC and Surya.

“That was some performance by team India. Solid grit shown right through,” wrote Rohit.

India will play the third ODI against Sri Lanka on Friday.