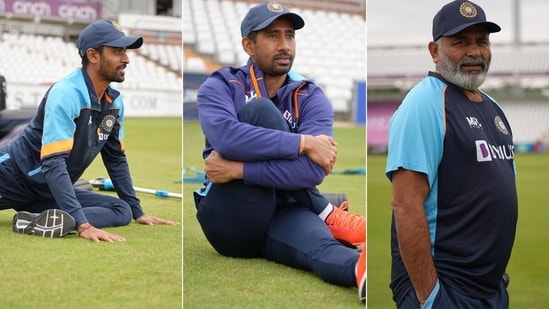 Bowling coach Bharat Arun, along with wicketkeeper Wriddhiman Saha and batsman Abhimanyu Easwaran reunited with the rest of the Indian team on Saturday after completing their isolation period.

The trio, who had come in close contact of assistant bowler Dayanand Garani – who had tested positive for Covid-19 on July 14 – had to spend 10 days in isolation in London as per the Covid protocols in the UK, as it rejoined the rest of the members of the Indian team in Durham on Saturday.

“Great to have you back gents. TeamIndia bowling coach B. Arun, Wriddhipops and Abhimanyu Easwaran have joined the team in Durham,” the BCCI.

Earlier, Rishabh Pant was welcomed back into the Indian team after the wicketkeeper batsman had completed his isolation period, with Ravi Shastri arranging a grand reception for him with a garland. Pant was the first member of the Indian cricket contingent in the UK to contract the virus on July 13 and had to miss the three-day warm-up game against Select County XI which ended in a draw.

Arun, Saha and Easwaran even engaged in a training session with the rest of players and the two players are now available for selection for the five-Test series against England starting August 4 at Trent Bridge, Nottingham. There is, however, no news on Garani.

Easwaran is one of India’s four stand-by players on the tour of England, along with fast bowlers Prasidh Krishna and Arzan Nagaswalla. Avesh Khan, who was another reserve player remains a doubtful contender after copping a blow to his thumb while playing the practice-match. As per reports, Avesh’s injury is serious and he is all but out of the Test series.

Saha is the second wicketkeeping option for India after Pant, who last played a Test match for India in December of 2020 – the Day/Night Test against Australia in Adelaide, where he scored 9 and 4.