‘Chahar was rejected by Greg Chappell for his height’: Prasad urges not to take ‘overseas coaches too seriously’ 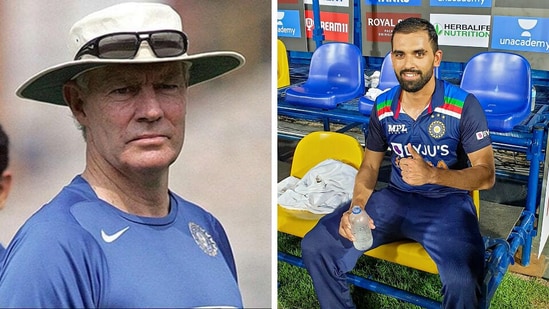 Former India fast bowler Venkatesh Prasad, in a tweet, has revealed that Deepak Chahar was rejected by former coach Greg Chappell when the fast bowler was a youngster trying to get into the Rajasthan Cricket Association and sent out a message which stated that overseas coaches should not be taken too seriously.

Prasad’s comments come after Chahar played the innings of his life, helping India to a thrilling three-wicket win against Sri Lanka in the second ODI in Colombo. With India struggling at 116/5 and later at 193/7, Chahar scored 69 not out and put on an unbeaten 84-run partnership with Bhuvneshwar Kumar to guide India home in a successful chase of 276.

“Deepak Chahar Was rejected by Greg Chappell at RCA for his height and told to look at a different occupation. And he single-handedly won a match with not even his primary skills. Moral of the story – Believe in yourself and don’t take overseas coaches too seriously,” Prasad said.

“There are off-course exceptions but with such wonderful talent in India, it’s time that teams and franchisees consider having Indian coaches and mentors as much as possible,” he further said.

Deepak Chahar Was rejected by Greg Chappell at RCA for his height and told to look at a different occupation.
And he single handedly won a match with not even his primary skills.
Moral of the story- Believe in yourself and don’t take overseas coaches too seriously.

Chappell had an infamous stint as coach of the Indian team from 2005 to 2007. His spat with the then India captain Sourav Ganguly is still one of the most controversial chapters in Indian cricket. Under him, India won 17 consecutive matches chasing but they had a disastrous World Cup 2007 where they were booted out of the tournament in the first round itself following defeats to Bangladesh and Sri Lanka.

Chappell was shown the door after India’s disastrous show, after which he served as an academy coach for the Rajasthan Royals. Apparently, that is the time when the incident took place. In fact, former India opening batsman and a long-standing servant of Rajasthan cricket, Aakash Chopra had mentioned the same during an episode on ‘Aakash Vani’.