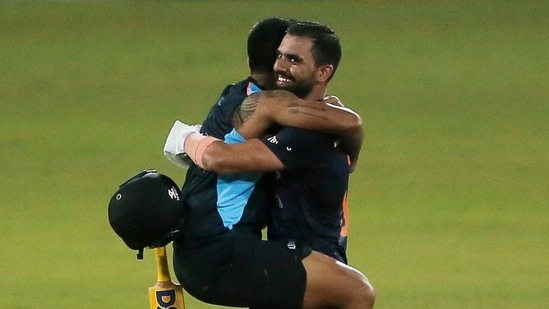 Deepak Chahar on Tuesday night garnered all the attention as he played a remarkable innings to take India home in the 2nd ODI in Colombo. When Chahar was batting in the middle, former India captain and head of this Sri Lanka series Rahul Dravid was seen having a few anxious moments inside the dressing room. After leading India to an improbable 3-wicket win by hitting his maiden ODI fifty, Chahar revealed what Dravid had told him before walking out to bat on Tuesday.

After the dismissal of Suryakumar Yadav, who also notched his maiden ODI fifty and ended up scoring 53 off 44 balls, Deepak Chahar and Bhuvneshwar Kumar teamed up and stitched an 84-run stand for the eighth wicket to finish the chase successfully.

Chahar was the top-scorer for India, returning unbeaten 69 to bag the Player of the Match award. After the game, the 28-year-old spoke about his innings and revealed what he was told by head coach Rahul Dravid.

“No better way to win the match for the country. Rahul sir told me to play all the balls. I’ve played a few innings with India A and I think he has belief in me. He told me he thinks I’m good enough to be a No. 7. He has belief in me. Hopefully, in the coming matches I don’t have to bat,” Chahar said at the post-match presentation ceremony.

“It was a decent score [to chase] on this wicket. Only one thing that was going on in my mind: this is the kind of innings I’ve been dreaming of. When we came under 50 is when I believed we can win. Before that, it was ball by ball. I took some risks after,” he concluded.

Chahar’s 69* is the 2nd highest score by an Indian No.8 in ODIs. All-rounder Ravindra Jadeja stands on the top of the list with his knock of 77 runs against New Zealand in the 2019 World Cup in Manchester.

The visitors have taken an unassailable 2-0 lead in the three-match series.

India will face Sri Lanka in the third and the final match of the series on Thursday at the same venue.

Rahul Dravid rushes from India dressing room to dugout to pass on a message for Deepak Chahar, Twitter goes wild