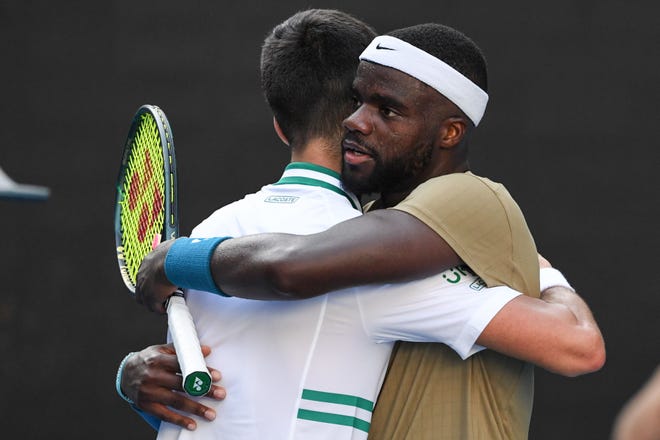 American Frances Tiafoe is perhaps one of the few players in the field here eager for the opportunity to face him.

Though he’s currently the fifth-ranked American and No. 53 in the world, a spate of Olympic defections has made Tiafoe the de facto face of the U.S. team in Tokyo. And if he ends up facing Djokovic somewhere in the draw, the 23-year-old is exactly the type of flashy, boom-or-bust type player that could be problematic for the 20-time Grand Slam champion.

“He’s a straight pro,” Tiafoe said. “His process every day is crazy. I’m not surprised he’s playing. He’s trying to achieve something extremely crazy this year, and obviously I hope I can be a guy to stop him. I love seeing greatness and if I can stop it, that would be cool. We’ll see. I don’t mind the matchup against him.”

There’s a reason Tiafoe would go into a match against Djokovic with some confidence. When they faced off in the second round at the Australian Open earlier this year, Tiafoe played excellent tennis to even the match at one set apiece and took the third set to a tiebreaker. Even in the fourth set, Tiafoe produced punishing groundstrokes and didn’t fade until the last couple games, finally succumbing after a 3½-hour battle.

“I thought we both played on a pretty high level,” Djokovic said after that match. “I mean, he pushed me to the very limit I think.”

Similar to when they met in Australia, the Tokyo Games will be played on a hard court in hot, humid conditions that bothered Djokovic. And with the Olympics being played in a best-of-three format instead of the best-of-five that Djokovic has dominated at the Grand Slams, there’s certainly more potential for the variance that a player like Tiafoe can create

On a slightly slippery slope,' Chopra says 31-year-old batsman may need to 'score a century' in 3rd ODI