'He may no longer get a chance for India in ODIs': Sehwag names 'biggest disappointment' from three-match series vs SL - Fairplay News - Latest sports updates, scores and cricket news.

‘He may no longer get a chance for India in ODIs’: Sehwag names ‘biggest disappointment’ from three-match series vs SL 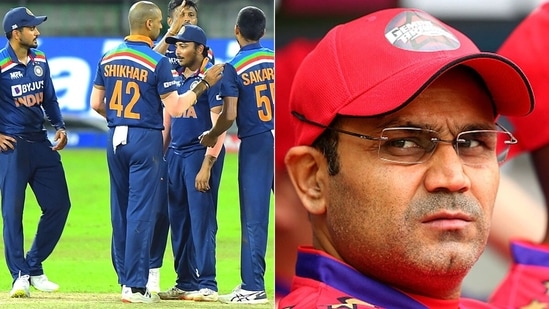 The three-match ODI series against Sri Lanka proved to be a success for India. Although they lost the final ODI by three wickets, the fact that they took the series 2-1 with some prolific performances from youngsters was the biggest gain for Shikhar Dhawan’s young team.

If in the first ODI, the batting clicked as a unit, Deepak Chahar’s exploits with the bat in the second game won many hearts. Even in the third game on Friday, playing their debut game, Chetan Sakariya and Rahul Chahar picked up wickets and led a late fightback.

However, if there were positives, there were certain setbacks as well, with former India opening batsman Virender Sehwag pointing out who according to him was the ‘biggest disappointment’ for Team India. Although Sehwag was critical of Hardik Pandya’s efforts with the bat, it was Manish Pandey  inability to put up a big score in all three matches that he rued the most. Pandey scored 26, 37 and 11 in three games when there wasn’t too much pressure on him and Sehwag reckons it may be the end of the road for the India batsman in ODIs for the time being.

“Here was an opportunity for Manish Pandey and even Hardik Pandya for that matter. Both had scored some 15-20 runs so they disappointed me more. In this three-match series, if anyone got the most benefit, it was Pandey. He played all three matches, and got the chance to bat, and on all the three occasions, the situation wasn’t challenging either that he had to accelerate,” Sehwag said.

“So, I believe Pandey has disappointed me the most. Perhaps he may no longer get a chance in ODIs for India, and even if he does, it is going to be a long time. Since he lost the opportunity to score in these three matches, he’s fallen behind in the pecking order. Suryakumar Yadav and Ishan Kishan have scored runs so these two will be considered ahead of him in the middle order.”

Sehwag defended Prithvi Shaw for the manner in which he got out. Twice in three matches did Shaw get a start – 43 in the first ODI and 49 in the third – but on both occasions, the youngster could not cash in. Although certain sections feel Shaw should be more careful and proactive about capitalizing on starts, Sehwag understood his dismissal, where he was out LBW to Dasun Shanaka.

“I understand that when a player is in touch, he would want to score more but it sometimes happens that you cannot read the game properly, like it happened with Shaw. He probably did not expect the ball to come to him so quickly and rap him on the pads,” Sehwag added.

'I did not get involved': Suryakumar responds to questions on Manish Pandey's place in the ODI side