'I got to know my responsibilities': Suryakumar reveals moment when things 'started to change' for him - Fairplay News - Latest sports updates, scores and cricket news.

‘I got to know my responsibilities’: Suryakumar reveals moment when things ‘started to change’ for him 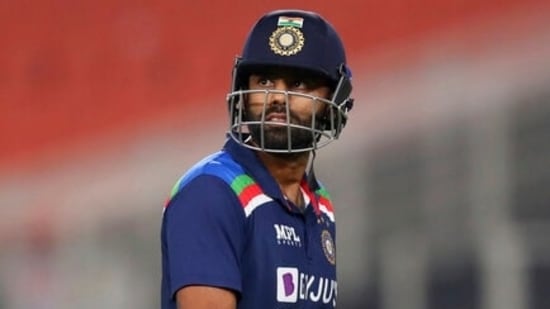 After winning the series, India made 6 changes to the team for the 3rd ODI. They lost the match by 3 wickets after a middle-order collapse. However, the batting display of Shaw was again on display as he hit 49 runs off 49 balls at the top of the order.

Shaw received praise from ‘Player of the Series’ Suryakumar Yadav, who called the opening batter a ‘showstopper’. Surya also revealed that Shaw worked really hard on his fitness.

Avishka Fernando (76) and Bhanuka Rajapaksa (65) smashed their respective fifties to ensure Sri Lanka did not lose the final ODI despite a late wobble.

“I only have one word for Prithvi Shaw, I call him showstopper. Whenever he bats, everyone’s eyes are on him. I want him to remain the same, he is batting really well and his attitude is pretty nice as well. He has worked really hard on his fitness and it is very good to see him doing so well,” said Suryakumar during a virtual post-match press conference.

When asked about his performance and the road ahead for him, Suryakumar said: “Obviously, everyone dreams of playing for India. It has taken a lot of effort, grind, and patience to achieve this feat. It has been worth the wait and I am really happy about it. From here on, how I build on is in my hands. I am really excited about what lies ahead. I am disappointed with not carrying on, I got a good start in the first game, and in the second game, it was a perfect opportunity to win a game for the team. I got out then and I was disappointed to not play till the end. In the third ODI, I was also not able to play till the end, but that is how we learn and move forward.”

“I have always been batting the same way like I am batting right now. When I came to Mumbai Indians in 2018, it started to change for me. I got to know my responsibilities and how I can take it one step ahead and that is when I started practicing more. I am really happy with the way things are going. I have been a Mumbai boy, when you grow up there, the wickets you play on, are challenging. I will be doing the same thing and keep things simple and follow my routines. I just want to keep it simple,” he added.

India was all out for 225, with Prithvi Shaw and Sanju Samson scoring 49 and 46 runs respectively and Sri Lanka chased down the target in the 39th over after the match was reduced to 47 overs per side due to rain.

Opting to bat first, India got off to a bad start as the side lost skipper Shikhar Dhawan in the third over. Prithvi Shaw then stitched a 74-run stand for the second wicket with Sanju Samson.

The opening batsman fell just one run short of what would have been his maiden ODI fifty in the 16th over. Samson also departed a few overs later before rain halted the play. After the game resumed, India suffered a collapse as the visitors kept losing wickets at regular intervals and were finally folded for 225/10.