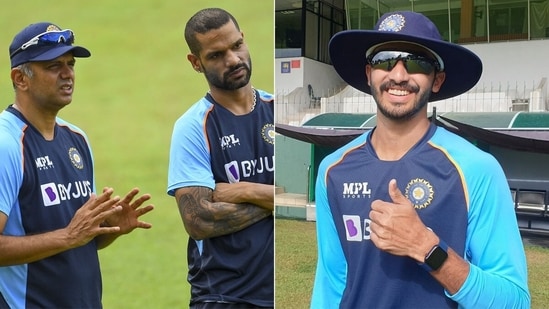 Now that the ODI series is in the bag, India are expected to go back to the drawing board as they look for a fresh start in the T20I series. If there is one thing India have realised from the three 50-overs matches, it is that Sri Lanka may not be a team it was, there surely is a lot of determination in the current unit. Hence, the room for experimentation may not be much as it was in the third ODI. Having said that, one name India can definitely not ignore is that of Devdutt Padikkal, who has been itching to have a go, and is likely to make his India debut.

Ishan Kishan is set to return to the XI, but Sanju Samson could keep wicket ahead of Manish Pandey. In the pace department, the usual suspects Bhuvneshwar Kumar and Deepak Chahar are likely to make a comeback, while Rahul Chahar and Varun Chakravarthy are expected to be given a look in ahead of Kuldeep Yadav and Yuzvendra Chahal. With that in mind, here is a look at the 11 players Shikhar Dhawan may field for the opening T20I content on Sunday at the R Premadasa Stadium in Colombo.

1 Shikhar Dhawan (Captain): Shikhar Dhawan remains an automatic pick in the ODI formats, but it is the T20Is where he really wants to present a case for himself. Although Dhawan’s numbers in the format aren’t too bad, with the T20 World Cup later this year, the India captain would want to lead from the front and get some runs under his belt to ensure he opens with Rohit Sharma when the grand spectacle comes rolling.

2 Devdutt Padikkal: On Saturday, reports circulated that Prithvi Shaw is set to leave for England for the Test series. If that is true, he would be leaving for the UK immediately, which means that his time in Sri Lanka has effectively come to an end. This could open the gates for Padikkal who is raring to go. An opener by trait, the 22-year-old had lit up the IPL 2020, scoring over 400 runs in his maiden season and peeled off a century for RCB earlier this year as well.

3 Ishan Kishan: After he scored a handsome half-century on debut, Ishan Kishan is set to come back in the team after missing out the final ODI. Ishan has played two T20Is previously for India and already has a half-century in the format in his first game.

4 Sanju Samson: Sanju Samson has in the past been guilty of throwing away his opportunities, but it did not seem to be the case on Friday as he played a wonderful knock of 46. Unlike his earlier errors, Samson played patiently and did not take up the T20 approach. He is likely to retain his place in the XI with a hope he can get back-to-back impactful scores.

5 Hardik Pandya: Time is running out for Hardik Pandya. The all-rounder needs a credible score with the bat if he is to hold his place into the team. With so many youngsters vouching for that all-rounder’s slot, including his brother, Hardik needs to come good with both bat and ball. In the third ODI, he started off well with three quick fours before throwing his wicket away and picked up a wicket, and Hardik needs to use that confidence going forward.

6 Krunal Pandya: After receiving a bashing at the hands of England batsmen in the T20Is at home, Krunal Pandya has turned over a new leaf with his left-arm spin in the ODIs. He would be hoping to maintain the same economy rate and provide some lusty blows batting down like he did in the first two games.

7 Deepak Chahar: Hero of the second ODI, Deepak Chahar is set to return to the 20-over format, likely taking Chetan Sakariya’s place in the XI from Friday’s game. Credit to Sakariya for picking up two wickets in his debut, but what Chahar did was sensational. It’s important for India to make the most of his hot form and not let their guard down.

8 Bhuvneshwar Kumar: Bhuvneshwar Kumar will once again lead India’s bowling attack in the company of Chahar. He is even more threatening in T20Is, with his ability to pick up early wickets for the team. Also, with the T20 World Cup three months away, it will be important to see how he shapes up ahead of the IPL.

9 Navdeep Saini: With two swing bowlers in Chahar and Bhuvneshwar, India could do with some pace and Navdeep Saini appears an ideal fit. He bowled with intent in the third ODI and can trouble the Sri Lankan batsmen with his speed and the new ball.

10 Rahul Chahar/Yuzvendra Chahal: Yuzvendra Chahal bowled exceedingly well in the first two ODIs, but Rahul Chahar impressed as he claimed three wickets on debut. In his final spell, he had the Sri Lankan batsmen in tangles as India threatened to run away with the game. A tough choice, but India might just give the nod to Chahal for this one.

11 Varun Chakravarthy: India’s mystery spinner Varun Chakravarthy is a strong contender to get a game ahead of Kuldeep Yadav. Chakravarthy has shown that he can be a handful with his bag of tricks and Sri Lanka would be a good start from him to bamboozle their batsmen.

Some of the stuff listed there is beyond comprehensible’: Mickey Arthur asks SL players to stay away from social media