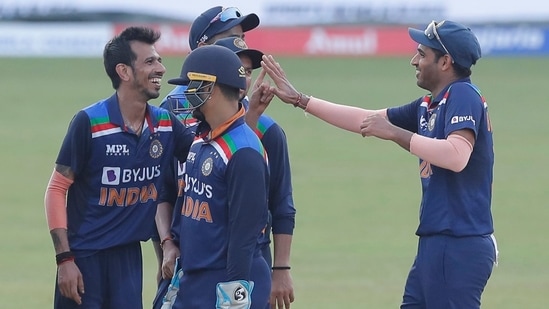 If there were any doubts about the depth of the young Indian side currently in Sri Lanka, they were all erased with their stunning victory in the second ODI. The first ODI was about showing their class and authority. The second ODI showed the character and resilience of the side when India, holding the hands of Deepak Chahar and Bhuvneshwar Kumar, came back from 193 for 7, to chase down the 276-run target with five balls to spare.

The Shikhar Dhawan-led side will be high on confidence when they take on a mentally disintegrated Sri Lankan side in the third ODI in Colombo on Friday. Apart from going for a whitewash, the fact that India have only 4 limited overs matches – the 3rd ODI and three T20Is – left before heading to the T20 World Cup, would be on coach Rahul Dravid’s mind. He would perhaps be thinking to give few other talented youngsters a go in the final ODI.

Shikhar Dhawan: The captain did what he is known to do best in limited-overs cricket in the first match. He provided assurance and batted deep to help India chase down the target. In the second match, he was deceived by a good delivery from Hasaranga. Dhawan will be eyeing a big one on Friday.

Prithvi Shaw: Easily the most eye-catching batsman on display from both sides, Shaw, has been like an instant firecracker in this series. He exploded with flares, sparks, sound but the scenes did not last long. It was beautiful, exciting but left the fans were left wanting more. His problem against the spinners early on is also going to keep the Indian management on their toes. With openers like Devdutt Padikkal, Ruturaj Gaikwad waiting in the ranks, Shaw would be hoping to put up a notable score in the third ODI.

Ishan Kishan: The attacking left-hander is another one of the new-age Indian batsmen who have no fear of losing his wicket. Ishan Kishan’s clean ball striking and a fifty on debut at the top of the order has kept another explosive keeper-batsman Sanju Samson away from the XI.

Sanju Samson: He was not available for selection in the first match due to a niggle and Kishan, who played that game grabbed the opportunity with both hands. But it’s hard to keep someone like Samson on the bench for far too long. Even if it is at the expense of the experienced Manish Pandey, who was playing well before being run out in the unluckiest manner possible in the second ODI, the Indian think tank should not mind. Samson might get his ODI cap in the final match against Sri Lanka.

Suryakumar Yadav: Class, temperament, conviction, ability to hit gaps – Suryakumar Yadav has everything that you wish in a top-class limited-overs cricketer. The right-hander is going through a purple patch. He was well set for a big one in the previous ODI before getting trapped by Hasaranga. Suryakumar would be eyeing a good score on Friday.

Hardik Pandya: There were a few concerns over Hardik Pandya’s back after the all-rounder was seen having some issues while bowling during the previous match but Bhuvneshwar Kumar later confirmed, that there is nothing to worry about. So Hardik is expected to play the 3rd ODI.

Krunal Pandya: Krunal has been the more impressive one among the Pandyas in this series both with bat and ball. The all-rounder did a fine job with the ball in the first match and then backed that up with an important knock in the third ODI that kept India in the chase.

Deepak Chahar: The man of the moment for India both with bat and ball. Deepak Chahar impressed everyone with the knuckleballs and slower bouncer but what he did with the bat in hand on Tuesday, made him trend on social media and search engines for more than 8 hours. Chahar would be looking to carry on the good work in the third ODI against Sri Lanka.

Bhuvneshwar Kumar: The experienced Bhuvneshwar Kumar is yet to strike with the new ball but he has shown why he is such an important cog in India’s wheel in white-ball cricket with consistent performances in the previous two ODIs.

Kuldeep Yadav: 2/48 and 0/55 have been Kuldeep’s figures in this series but the left-arm wrist spinner has shown signs of improvement and India would want to give him as many matches as possible before finalising the T20 World Cup squad.

Rahul Chahar: After Chahal’s impressive show in the first two ODIs (2/52 and 3/50), India might be tempted to try out another spin option for the third ODI and who better than leg-spinner Rahul Chahar. He will be a like-for-like replacement for Chahal in the third ODI.