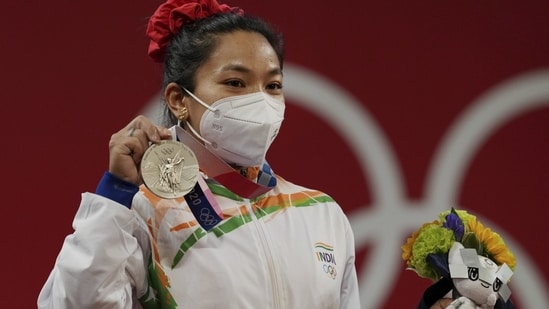 Mirabai lifted a total of 202kg – 87kg in Snatch and 115kg in Clean and Jerk – to better Karnam Malleswari’s bronze in the 2000 Sydney Olympics. The Manipur weightlifter also became only the sixth Indian woman to bag an Olympics individual medal after Maleswari, Mary Kom, Saina Nehwal, PV Sindhu, and Sakshi Malik.

With Friday’s performance, Mirabai also exorcised the ghosts of the 2016 Games where she had failed to log a single legitimate lift, leaving her shattered.

“𝗠𝗜𝗥𝗔𝗕𝗔𝗜 𝗖𝗛𝗔𝗡𝗨! Absolutely amazing display of weightlifting. The way you have transformed yourself after your injury and clinched a historic silver for TeamIndia is absolutely stupendous. You have made very proud,” wrote Sachin Tendulkar.

“Congratulations MirabaiChanu on making us proud and bringing us glory. Our firstmedal at the TokyoOlympics2020 , a in the Women’s 49kg weightlifting . Super Proud,”  VVS Laxman.