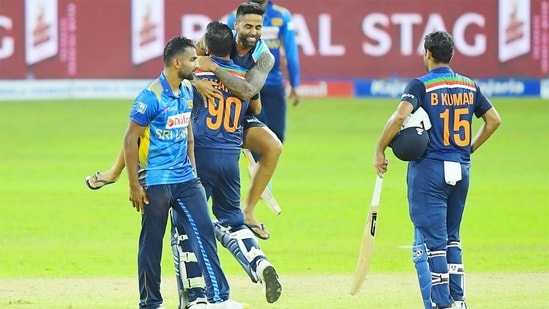 Several records were shattered as India outwitted Sri Lanka by three wickets in the second ODI on Tuesday to register a series-clinching 2-0 win. Sri Lanka made a strong start in the match, posting a challenging total of 275 and later restricted India to 116/5. But right when it mattered the most, they failed to seize the opportunity and let it slip, allowing India to come back strongly and register their ninth consecutive ODI series win over Sri Lanka.

The win holds plenty of significance for India. Not only was Tuesday’s win their 10th consecutive ODI win over Sri Lanka, the victory allowed India to register a world record. The three-wicket win was India’s 93rd against Sri Lanka, the most by any team against an opponent as the Men in Blue overtook Australia’s tally of 92 ODI victories over New Zealand.

Now, on to individual performances. Deepak Chahar emerged as the hero of the match as his unbeaten 69 with the bat led India to a thrilling final-over win. Chahar scored those runs coming in at No. 8, which gives him another accomplishment to be proud of. His 69 not out is now the second-highest score by an Indian batting at No. 8 in ODIs as he overtook JP Yadav’s 69 against Bulawayo in 2005. Ahead of Chahar is all-rounder Ravindra Jadeja, who scored 77 against New Zealand in the semi-final of the 2019 World Cup.

The 84-run unbeaten partnership between Chahar and Bhuvneshwar Kumar is also the second-highest eighth-wicket partnership for India in ODIs. The highest is a partnership of 100 runs, which also featured Bhuvneshwar, when he was involved in a stand with former captain MS Dhoni in an ODI, also against Sri Lanka in 2017.

As India successfully chased down 276, it was the first time that the Indian team knocked down a target in excess of 250 without any of their top three scoring a half-century. Shikhar Dhawan, Prithvi Shaw and Ishan Kishan were dismissed for 29, 13 and 1 respectively.