LONDON, ENGLAND - AUGUST 29: Kevin Pietersen of England looks on in the field during day four of the 4th npower Test Match between England and Pakistan at Lord's on August 29, 2010 in London, England. (Photo by Clive Rose/Getty Images) 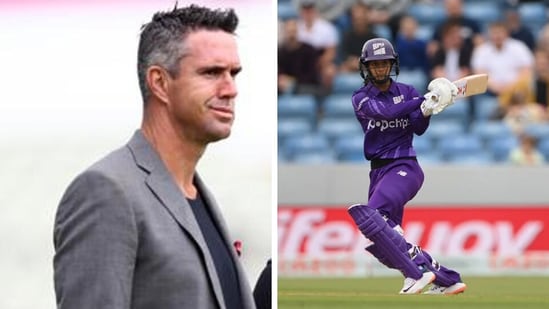 Indian batter Jemimah Rodrigues wowed the cricketing world on Saturday as she smashed an unbeaten 92 runs off 43 balls for Northern Superchargers in the fourth match of ‘The Hundred. Chasing a target of 132 runs, the Superchargers needed just 85 balls to get to Welsh Fire’s total after Rodrigues’ splendid innings to record a six-wicket win.

The Superchargers were reduced to 19 for 4 after just 18 balls when Rodrigues took the attack to the opposition. It was a match-winning innings with 17 boundaries and a six by Rodrigues as she single-handedly changed the complexion of the game.

Former England skipper Kevin Pietersen was impressed by her performance as he called Rodriques his ‘favourite player.

On the day, she showed her attacking instincts with some delectable strokes all round the wicket as West Indies off-spinner Hayley Matthews was taken for 29 off 15 deliveries including six boundaries.

She didn’t spare any of the bowlers as 17 out of the 21 fours that Superchargers hit came off her blade. Fittingly, she got the ‘Player of the Match’ award.

2 jabs of vaccine has to be trusted': Shastri says isolation 'frustrating' after fully vaccinated Arun returns to squad