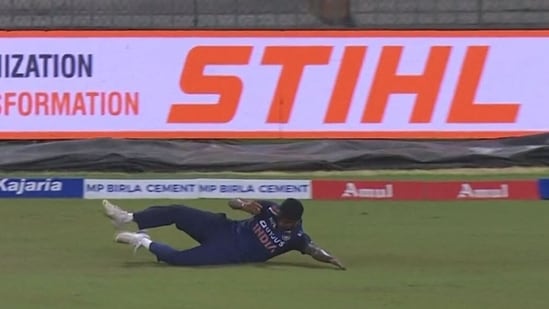 All-rounder Krishnappa Gowtham made his ODI debut on Thursday and garnered attention with his outstanding fielding efforts at the R Premadasa Stadium. After picking up his maiden international wicket, the Karnataka cricketer took an amazing catch to help young pacer Chetan Sakariya to get his first ODI scalp.

Sri Lanka went off to flyer during their chase of 226. Despite losing their first man at a total of 35, the duo of Avishka Fernando and Bhanuka Rajapaksa showed immense character and stitched a 109-run stand for the 2nd wicket. Both of them scored fifties while Indians were running out of ideas to break this camaraderie.

It was Sakariya who struck in the 23rd over and took down Rajapaksa for 65. The left-arm quick bowled a short of a length delivery, forcing the Sri Lanka No. 3 to play a mistimed flick. Gowtham saw the ball coming and ran towards the fine leg to grab the ball in a spectacular way.

Sakariya, who had missed the chance in the previous ball as Nitish Rana dropped the catch, celebrated his maiden international wicket with arms aloft. He had got a crucial breakthrough after all.

Sakariya returned with the figures of 2 for 34 while Rahul Chahar picked up 3 wickets. However, the base established by Fernando and Rajapaksa and then Charith Asalanka chipping in with a handy 24 off 28 balls helped the hosts win the 3rd ODI by 3 wickets and avoid a whitewash.

Indian lifted the trophy with a 2-1 series win. Both teams will lock horns in the first T20I of the three-match series which gets underway on Sunday at the same venue.

'We can pick two more teams and win any competition in the world': India all-rounder Hardik Pandya