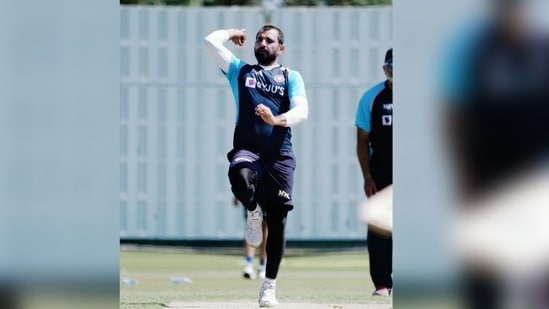 The first Test against England is almost 2 weeks away and the Indian players are leaving no stones unturned to prepare themselves. A majority of them recently participated in a 3-day practice game against a County Select XI which ended in a draw. With a few days to go for the series to begin, ace fast-bowler Mohammed Shami looked completely pumped up in a practice session.

The right-arm was seen practicing in the nets, where his fluid action and trademark run-up were in full display. Shami took to social media and shared his training video. The minute-long video comprises three deliveries.

The first one was a good length delivery which troubled the batter a bit. The next one was a bit fuller and the batter warded it off to the leg side. The final delivery was well guided at the stumps. Shami captioned the video as “Practice Session mdshami11”.

Shami didn’t feature in the warm-up fixture against County XI. However, he will one of the key pacers in the Indian line-up in the upcoming Test series. He had a decent run in the World Test Championship final against New Zealand. He was the pick of the bowlers when India bowled out the Kiwis in the first innings. Shami returned with the figures of 4-76.