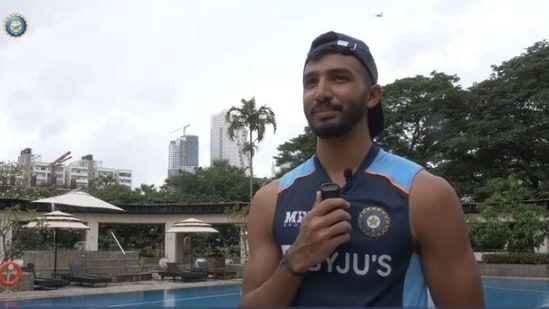 Indian cricketers in Sri Lanka are in the best possible headspace right now. After pocketing the ODI series with a stunning victory in the previous match, the likes of Hardik Pandya, Krunal Pandya, Devdutt Padikkal, Sauryakumar Yadav, Ishan Kishan, Varun Chakravarthy and Kuldeep Yadav indulged in a game of ‘wrong answers only’ ahead of their third and final ODI against Sri Lanka in Colombo.

In the video posted by BCCI on Twitter on Thursday, the young guns were seen giving ‘wrong answers only’ to some quirky questions like ‘what is your name?’ ‘which sport do Messi and Ronaldo play?’ ‘what is the shape of the earth?’ ‘who were the actors in 3 Idiots?’ and so on.

While almost all of them came up with some hilarious replies to all the questions, opening batsman Devdutt Padikkal perhaps took the cake when said his name was Roger Federer.

Chakravarthy gave a tough fight to Padikkal when said “My name is Rajnikant.”

The Pandya brothers too were at their best while giving the ‘wrong answers.’ Hardik said the actors in 3 Idiots were he, Krunal and Kieron Pollard.

Meanwhile, Shikhar Dhawan-led India won the first game by seven wickets, Deepak Chahar pulled a heist in the second one with his match-winning unbeaten 69 as the visitors won by three wickets.

Now, it remains to be seen whether India continue with Prithvi Shaw, who got scores of 43 and 13, to partner the skipper at the top, or go in for classy Devdutt Padikkal or an equally elegant Ruturaj Gaikwad — both superb List A players.

If Shaw gets another opportunity, he would be more than keen to get a big score, as he failed to convert his start in the first game.

Another dilemma for the team management would be whether to persist with aggressive Ishan Kishan or give an opportunity to Sanju Samson, another hard-hitting batsman, to make his ODI debut.