Rahul Dravid rushes from India dressing room to dugout to pass on a message for Deepak Chahar, Twitter goes wild 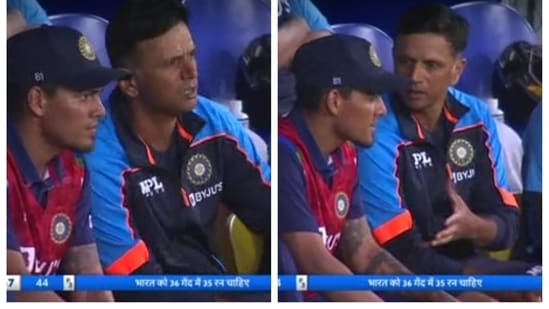 Rahul Dravid was an anxious figure at the Indian dressing room. Such was the pressure of watching two bowlers Bhuvneshwar Kumar and Deepak Chahar trying to shepherd India’s chase in the 2nd ODI against Sri Lanka in Colombo that even ‘The Wall’ could not sit tight. At the end of the 44th over of the Indian innings, Dravid was seen rushing down the staircase of the dressing room and making his way into the Indian dugout.

The former India captain and head coach of the Sri Lanka tour then sat beside Rahul Chahar, India’s hero of the 2nd ODI Deepak Chahar’s cousin, and passed on some valuable instruction.

India needed 35 runs off 36 balls with three wickets in hand at that time. Chahar and Bhuvneshwar had just started to turn the match towards India. All it needed was a calm head and Dravid knew the importance of staying focus and not lose a wicket. The head coach sensed that Chahar was getting anxious and going for risky shots which were not required and perhaps asked Rahul to pass on the message to his brother.

Rahul Chahar finally got time when Deepak suffered cramps in the 47th over. It perhaps was a blessing in disguise for India as the injury wasn’t serious but it allowed enough time for the substitutes to pass on Dravid’s message.

The result was for there for everyone to see. Deepak Chahar played four consecutive dot balls in the next over off Wanindu Hasaranga. He did not attempt a single attacking shot and played out Sri Lanka’s biggest threat who had already picked up three wickets.

Chahar and Bhuvneshwar then hit three boundaries in the next 7 balls to take India home with three wickets in hand.

Dravid was seen sporting a huge smile and giving a standing ovation to Chahar and Bhuvneshwar when India got the winning runs in the first ball of the last over.

Chahar was unbeaten on 69 off 81 balls while Bhuvneshwar Kumar 19 off 28. Their 84-run stand was the third highest in the successful run-chases for the 8th wicket in the history of ODI wicket.

India had won the first ODI by 7 wickets and with the win on Tuesday they took an unassailable 2-0 lead in the three-match series. The third ODI will be played on Friday.