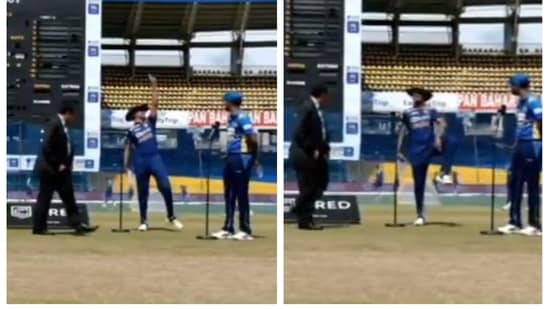 Trust Shikhar Dhawan to put a smile on a fan’s face every time he steps on to the field. Dhawan, who always entertains with his strokeplay and celebrations after taking a catch, did not even need the match to start to get Twitter talking. The India captain for Sri Lanka tour perhaps became the first skipper to celebrate winning a toss. Dhawan broke into his customary kabaddi-like pat on the thighs as soon as he called it right during the third ODI against Sri Lanka.

The video of Dhawan celebrating his first toss-win as an Indian captain went viral on Twitter on Friday.

With a big smile on his face, the left-handed opener told  HD Ackerman, who himself could not control his laughter, that India would bat first.

Dhawan’s antics at the toss floored commentators Sanjay Manjrekar and Ajit Agarkar in the Sony Sports studio. The former India cricketers enjoyed the moment as did all the Indian fans.

“He’s been waiting since the first game but finally got this opportunity today,” said Agarkar.

Dhawan had lost the first two tosses of this series with Sri Lanka captain Dasun Shanka opting to bat first on both occasions.

Dhawan’s celebration was not the only big news coming out from the toss of the third ODI. The left-hander also confirmed that India made six changes to their XI that beat Sri Lanka in the first two ODIs and five of them were debuts.

head coach Rahul Dravid ensured game time for almost everyone in the squad as Nitish Rana, Rahul Chahar, Chetan Sakariya, Kishnappa Gowtham and Sanju Samson made their debuts. Chahar and Samson have already played T20 Internationals for India. The sixth change in the side is pacer Navdeep Saini.

Praveen Jayawickrama, Akila Dananjaya and Ramesh Mendis are three changes in the Lankan side.