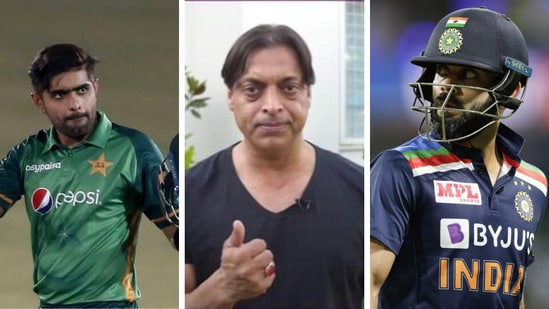 Shoaib Akhtar has given his view on the comparison between India captain Virat Kohli and Pakistan skipper Babar Azam, saying that despite all the comparisons that are being drawn between the two players, the debate surrounding the two is wrong.

Kohli, with 70 international centuries, is one of the world’s leading batsmen, and while Babar has been steadily climbing up the ladder. Babar is definitely one of the most promising batsmen of this generation and could be counted as a part of the Fab Five, along with Kohli, Joe Root, Kane Williamson, and Steve Smith. However, Akhtar reckons the gap between the two batsmen is way too much.

In fact, Akhtar has predicted Kohli to peel off 30 more centuries in the coming five years and backed the India captain to take his tally of international tons to at least 110 – 10 more than the current record-holder Sachin Tendulkar with 100 international hundreds.

“Virat has what… 70 centuries in international cricket right. So in the next five years, he will get 30 more and I want him to get 120 centuries, or at least 110. See, with these many runs, who can be compared to him? The debate in itself is wrong. And Babar is now coming through. It’s really good that there is healthy competition,” Akhtar told in an interview.

Babar is seven years younger than Kohli and started his international career in 2015. Akhtar feels that in order to catch up to Kohli’s stupendous record, the Pakistan captain will need to go on a rampage in the next few years. In the process, Akhtar feels Babar may become the greatest Pakistan batsman of all time, but whether he can better Kohli is something that can only be decided in another 10 years’ time.

“If Babar needs to beat Virat and surpass him, he will have to score more runs chasing and play the kind of innings Kohli has. There is no doubt that Babar Azam can probably be the greatest batsman of Pakistan, but it will take time. We will judge Kohli and Babar after 10 years where they stand,” Akhtar added.