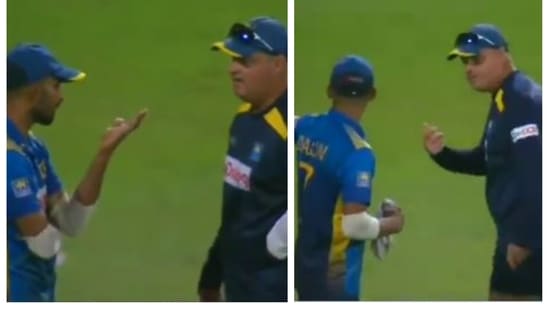 Sri Lanka head coach Micky Arthur and captain Dasun Shanaka were involved in a heated argument at the R Premadasa Stadium in Colombo after they were beaten by India in the 2nd ODI despite being in a winning position. The video of the Sri Lanka coach and captain arguing on the field went viral on social media.

Arthur was frustrated and was seen making animated gestures while sitting in the dressing room towards the end of the game when India lower-order batsmen Deepak Chahar and Bhuvneshwar Kumar were slowly taking the game away from Sri Lanka.

The Sri Lanka head coach continued the same even after India won the match by 3 wickets. Arthur stepped inside the ground and was seen having a heated argument with Shanaka before walking off.

Former Sri Lanka batsman Russel Arnold took note of the incident and said that discussion should have happened inside the dressing and not on the ground.

“That conversation between Coach and captain should not have happened on the field but in the dressing room,” Arnold said.

Batting first after winning the toss, Sri Lanka made a competitive 275 for 9 in 50 overs. In reply, India reached 277 for 7 with five deliveries to spare.

India lost seven wickets for 193 runs during their chase and looked in danger of defeat but Chahar paired with Bhuvneshwar Kumar (19 not out) for an undefeated 84-run stand for the eighth wicket to ensure victory.

Chahar, playing only his fifth ODI, remained unbeaten on 69 off 82 deliveries with seven boundaries and one six.

Earlier, Chahar also shone with the ball taking two wickets for 53 runs in eight overs in Sri Lanka’s innings and was named player of the match. Kumar took 3-54 off 10 overs.

It was Sri Lanka’s 10th successive ODI series loss to India as hosts.