Sri Lanka players celebrate Suryakumar Yadav’s wicket even after DRS confirms not out, get trolled on 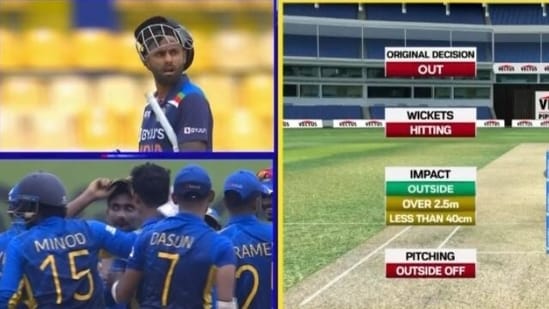 Trolled the Sri Lankan players for celebrating Suryakumar Yadav’s wicket early when the DRS had clearly shown the impact was outside the off stump in the third and final India vs Sri Lanka ODI at the R Premadasa Stadium in Colombo.

The incident occurred in the 23rd over of the Indian innings when Suryakumar Yadav missed an attempted sweep shot off left-arm spinner Praveen Jayawickrama. The ball hit Suryakumar’s front pad and the umpire raised his finger.

After a quick discussion with non-striker Manish Pandey, Suryakumar decided to go for the DRS.

It then took about five minutes for the replays to appear and when it finally did there was no shortage of confusion. The impact of the ball was clearly shown to be outside the line of the stumps, which meant the batsman cannot be given out. But here is where the confusion began.

Instead of stopping the process and asking the on-field umpire to reverse his decision, the third umpire decided to complete the replay where the ball went on to hit the stumps.

It was at that moment that the Sri Lankan players erupted in a celebration and Suryakumar Yadav too started to walk back.

Sri Lanka’s joy was however short-lived as the third umpire then instructed the on-field umpire to reverse his decision to not out. Suryakumar Yadav survived and continued to build on his innings.

Youngsters Prithvi Shaw and Sanju Samson frittered away fantastic starts as India reached 147 for 3 in 23 overs against Sri Lanka in the third and final ODI when rain stopped play.

Shaw (49 off 49 balls) and Samson (46 off 46 balls) were breathtaking as usual but failed to once again get big scores in a game where head coach Rahul Dravid handed out as many as five maiden ODI caps.

At the time of the break, Suryakumar Yadav (22) and Manish Pandey (10) were at the crease.