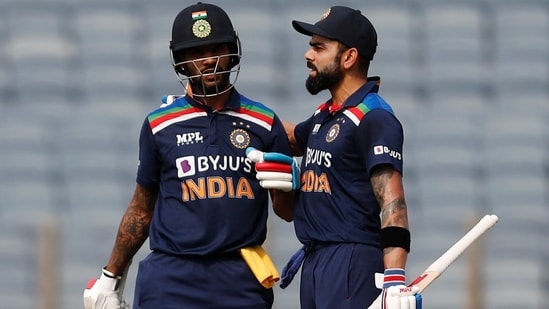 Regular India captain Virat Kohli could not control his excitement after a young Indian side came from behind to snatch a stunning three-wicket win against Sri Lanka in the 2nd ODI in Colombo. India took sealed the three-match series with the victory on Tuesday.

Kohli and other top stars Rohit Sharma, KL Rahul, Jasprit Bumrah are not a part of the Indian side in Sri Lanka. They are instead with the Test team in England. Kohli and Co. started their preparations for the five-match Test series against England slated to begin on August 4, with a three-day match against a County Select XI on Tuesday. But the Indian team in England, including Kohli were glued to their laptops, watching the online streaming of the India vs Sri Lanka 2nd ODI.

Great win by the boys. From a tough situation to pull it off was an amazing effort. Great to watch. Well done DC and Surya. Tremendous knocks under pressure,” said Kohli.

Chasing 276 for victory, India had lost half their side for 116. But Suryakumar Yadav struck his maiden ODI fifty and then Deep Chahar stitched on an unbroken 84-run stand for the 8th wicket to take India home.

Rohit Sharma, who was leading India in the County XI match as captain Kohli and vice-captain Rahane were resting due to injuries, also hailed the young Indian side’s performance.

“That was some performance by team India. Solid grit shown right through,” said Rohit.

Coming in to bat at number eight, Chahar (69*) turned the match on its head as he hit seven fours including the winning boundary and one six in his 82-ball knock.

Hasaranga struck early as he bowled Prithvi Shaw for 13 in his first over — third of the innings — and later trapped Dhawan lbw, a decision given not out by the umpire but successfully reviewed by Sri Lanka.

Yadav, an Indian Premier League star who made his ODI debut in the previous match, put on two partnerships including a 44-run sixth-wicket stand with Pandya.

He raised his maiden fifty off Lakshan Sandakan but fell lbw to the left-arm wrist spinner five balls later.

Hasaranga bowled Pandya for 35 to raise hopes of a Sri Lankan victory but Chahar, whose previous best was 12, put up his career-best show with the bat.