‘When he looks back, he will regret a little’ – Aakash Chopra criticizes KL Rahul’s knock against DC 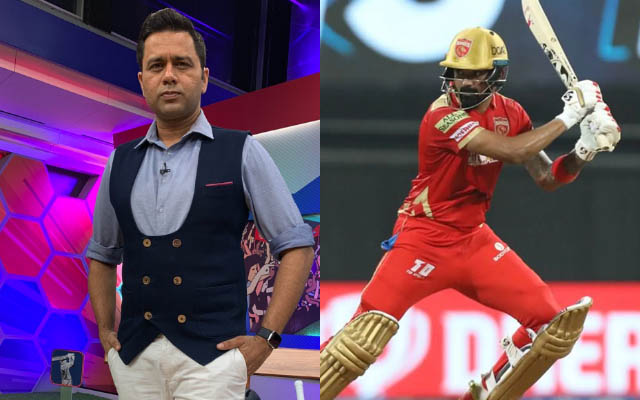 Punjab Kings and Delhi Capitals were involved in a high-scoring clash at the Wankhede Stadium in Mumbai on Sunday. Batting first, Punjab’s opening batsman Mayank Agarwal launched an assault on the opposition batters as he played a blistering knock of 69 runs off just 36 deliveries.

Mayank along with skipper KL Rahul stitched a crucial partnership of 122 runs in 12.4 overs in which the latter played second fiddle and anchored the innings. Punjab was batting with a run rate of 10 and was expected to post a score of 220 to 225 runs. However, Mayank’s wicket in the 13th over put a temporary halt on the flow of the runs.

Rahul was looking decent in the middle and was expected to lead from the front to give time to other batsmen to settle. However, the skipper failed to accelerate and lost his wicket in the 16th over after playing a knock of 61 runs off 51 deliveries. Towards the end, Deepak Hooda and Shahrukh Khan played quickfire-cameos as they scored 22 off 13 and 15 off 5.

However, Punjab Kings fell short of five runs from posting 200 runs on the board. The team’s inability of scoring 20 to 25 runs extra in the death overs made all the difference as Delhi Capitals won the match by six wickets with ten balls to spare. The former Indian cricketer and analyst Aakash Chopra opined on PBKS loss saying that KL Rahul will regret not accelerating his innings.

“When Mayank Agarwal got out, KL Rahul was required to accelerate a little, something he did in the first match. He had missed out on a century, but the acceleration was there. Here also the expectation was that he would hit. He did not do that, and when he looks back, he will regret a little because the finish was not strong,” said Chopra.

Further, Aakash held KL Rahul responsible for Punjab not being able to add a few runs more to the scoreboard. He also believes that the 29-year-old’s slow knock put pressure on Chris Gayle and that resulted in the dismissal of the power-hitter.

“Gayle was also dismissed after that. You wanted to score 60-70 runs in the last five overs. You didn’t score those many, and because of that, you didn’t reach around 220, where you should have probably reached,” added Aakash Chopra